Of course there is much more to Romania than the going clichés and stereotypes about maddening traffic, beautiful women and gentle landscapes, rude government clerks, fatty foods and loud partying. As a Romanian who has been living abroad for a third of her life (first in the United States and more recently in Germany), I hope I can demystify some aspects of how Romania (and my fellow Romanians) work, manage and tick. Of course, there are no guarantees, and the new generations are quite different from the old, so use your own judgement.

First off, if you are coming from a low-context, linear-active country, when doing business with Romanians I suggest you:

1. Clarify every detail and double-check

Romania is a high-context culture. This means that for the people living there their entire lives, a lot of information is understated or taken for granted. As a foreigner who is not familiar with the context, you will be in the dark about how Romanians understand and interpret information. Plus, the Romanian language and communication style is not as precise and leaves a lot of room for double meanings (many jokes and even advertising quips are based on this).

For example: when buying a blouse for my daughter, I was told I can exchange it if it doesn’t fit. In my low-context mindset (German influence), that meant come back, show the receipt, get an identical blouse in a bigger size. The context they did not communicate (because they were fully aware of it, but I wasn’t), was that I could exchange it only for a different but similar blouse which had the exact same price – or else they can’t replace it in their accounting system. They do not have two of a kind in different sizes, and they don’t give the money back.

So always try to get as much information as possible, but don’t obsess about it in a way that makes you look obnoxious. Romanians are usually forthcoming and solicitous towards foreigners, especially towards Westerners, but hate “sticklers”.

Things will be more convoluted, less clear-cut and less organized in Romania, but somehow they will get done in the end if you use the right approach (the right combination of carrot and stick 🙂 ). Show appreciation for the time, food and kindness Romanians will share with you. They like to be liked. Don’t start criticizing right away.

Romanians don’t have great deference for rules and authority (understandably so, after 50 years of dictatorship when the government was out to get them). Many think that strict laws and regulations are for “simpletons” who can’t outsmart them, and not for their own protection and social cohesion. Romanians don’t appreciate dogmatism.

3. Be prepared to get more personal than in northern cultures

Informal meetings with Romanians will invariably involve a lot of story-telling, joking, and quite generous amounts of food and/or drink (they also smoke a lot). Be able to talk about kids, personal adventures and experiences, and to crack the occasional joke. Romanians like “a man of the people”. To win their friendship and respect, show them you have wit.

But beware, too much horsing around will cause them to slack up. The more personable you become, the more informal and less serious the relationship – and the higher the likelihood they will be tempted to let things slide because you are now “friends”. If that happens, be ready to counter emotional arguments. Personal relationships are important but don’t exaggerate, they might backfire. You lose your trump card and get dragged into that high context you cannot control. So my advice to business people and managers is to maintain a certain level of factuality and an amicable but clear distance.

Remember, Romanians tend to coalesce more easily to avoid work than to boost productivity. Time is fluid and polychronic, there is a lot of “fruitless” debating and discussing. The process, the chance to make one’s opinion heard, and good relationships are often more important than the actual result. (Besides, immediate, short-term results are often valued more than long-term ones.)

To guarantee your desired organisational culture, when starting a business in Romania maintain the management in foreign hands at least until your way of doing things is staunchly implemented, starts running smoothly and is accepted as such by everyone. Romanian themselves often prefer this. (The reason being that some Romanian managers tend to become despotic and tweak things their own way if left unattended.)

Studies and surveys done by research institutes in Bucharest show that the best way to run a business in Romania would be with German organisational structure and British-style managers.

And one last piece of advice. Romanians love to impress their guests with their hospitality by sharing the best they have. Depending on how important your business is, expect a certain amount of heavy eating and partying.  If you can’t (or won’t) eat all that the host puts on the table despite their persistence, and if you want a way out but don’t want to hurt their feelings, kindly tell them that you cannot eat anymore at the moment, but the food is delicious and they should pack some up for you, because you want to savor it later. I have found that this usually works with my relatives 😉 . Also, don’t despair if you don’t understand Romanian humor at first – as everything else, it is highly contextual. Romanians love British humor and are quite up to date with American movies or the latest technologies.

The whole country is a work-in-progress. Things might not be as “settled”, smooth, well done or rigorous as you might expect. But it’s therein that a lot of opportunities lie.

Finally, for some comic relief, enjoy Thomas W. Lizard’s booklet “How to survive Romania (A satirical guide in 36 steps)” just out this May. Some say it’s required reading for newcomers. 🙂 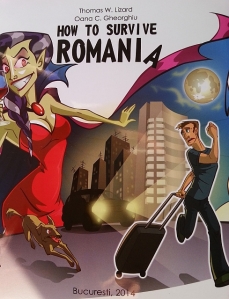 4 thoughts on “3(+2!) Tips For Doing Business With Romanians”